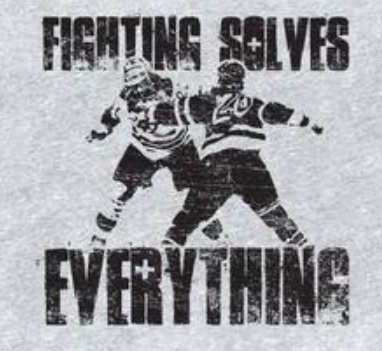 The bond between teammates is a special one.

Unlike other work places, these dudes spend nearly every hour of every day for months at a time with one another.

Naturally, this will lead to deep, lasting friendships.

Look no further than the Hall of Fame friendship between Rangers teammates Elvis Andrus and Adrian Beltré:

However, this close proximity of life and work situations doesn’t always have the best of results.

Look no further than the most recent news out of the Oakland A’s locker room.

Earlier this week, word got out that teammates Danny Valencia and Billy Butler got into a got into a brawl.

Turns out this wan't just another case of boys being boys.

That could be why the fight was so intense that Butler missed the next two games as a result of it.

Now, finally, but the impetus behind the fisticuffs has come to light. Call it a dude version of being catty.

The bad blood began when Butler ratted to a representative of a certain brand of equipment that Valencia wasn’t wearing the same spikes as his endorsement. Butler then built on this by telling the representative that they should drop Valencia as their client.

This was, of course, all done with Valencia standing right there. That's usually not a good thing.

It didn't need Jerry Springer or the Klan to escalate, either.

Once the rep left, Valencia confronted Butler about potentially costing him a couple grand. Butler threw an insult or two Valencia’s way, and fur flew.

A few shoves and head bumps weren't going to get the issue resolved, so Valencia launched a haymaker that connected with Butler’s temple.

Dude must've been taking notes earlier this season when Rougned Odor put on a clinic:

Valencia is yet to be disciplined for the incident, as the club's gone into mums the word mode on the incident for now.

Oddly enough, Valencia has received has reveived support from both teammates and ex-teammates, citing his professional attitude.

The blame here does seem to lie on Butler. It’s probably not a good idea to potentially cost a dude a bit of dosh and then mock him right to his face.

Altercations like that must be in Oakland's DNA. They were commonplace in their dynasty years of the early 1970's -- with much biger names involved -- giving rise to the double entendre that is the Swingin' A's.

That feisty attitude led to one of the World Series' strangest moments:

Who knows? Maybe this is what the franchise has been missing. Less sabremetrics and more fists.