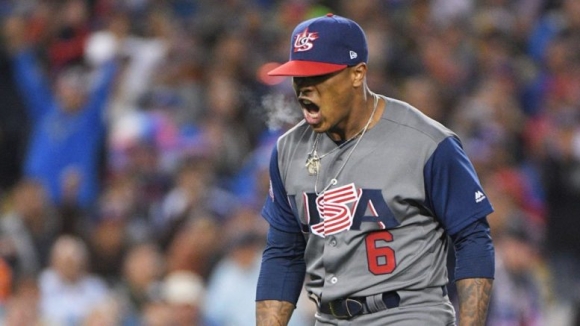 Dodger Stadium wasn't loaded to capacity to see the nation that invented the game to win an actual world title.

But everywhere else, viewers were treated to a classic performance from Marcus Stroman en route to Team USA's 8-0 whitewash of Puerto Rico.

Thank MLB's schedulers for their role in the elevated interest. The NCAA's Big Dance dominates March sports programing, but the World Baseball Classic deftly avoided it at the apex of its event, to the benefit of all. Especially Team USA:

The Puerto Ricans may not have taken the championship, but they captured the game's spirit with what will surely become the signature play of this event, complements of Yavier Molina and José Baez.

Meanwhile, the Americans finally followed through on expectations that have been thrust upon them since this tournament's inception. Ironically, it was a Rican who opted to pitch for the USA who carried the torch, but enough of Uncle Sam's favorite nephews accepted invitations to play this season, and their overall presence was well and truly felt.

Even more ironically, that scene's from a Team USA soccer highlight. Still, it came from an established worldwide phenomenon.

Who'd have thought baseball could generate the same sort of excitement on its own turf in a tournament that is still finding its way on the sporting calendar?

Plays like Adam Jones robbing Oriole teammate of a dinger and Mike Stanton blasting a double-decker will help:

Get rid of that Little League 11th inning tiebreaker, and this thing may yet have a future, Olympics or no.