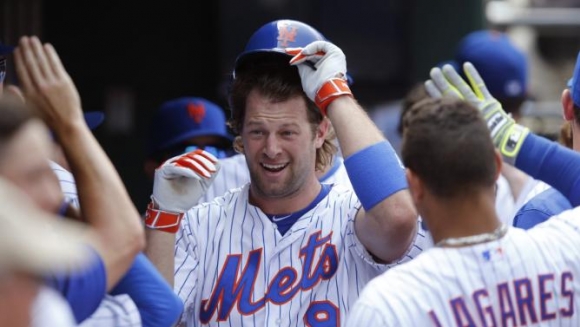 The term AAAA player is a controversial one in baseball.

That, of course, refers to a player who kills it in Triple A but can't get it together with any consistency at the major league level.

However, every so often, one of them assembles a stellar season or, at the very least, an exciting couple of games.

Lately, that would describe Kirk Nieuwenhuis of the New York Mets. Captain Kirk had a solid rookie campaign in 2012, helping to keep the Mets afloat for half a season:

Dude’s career after that -- and by the way, if he stuck to his Dutch origins as a player from New Amsterdam should, his surname would be pronounced new-ven-house -- took an immediate downturn, which resulted in several demotions and promotions over the course of the following two seasons. The Mets would later trade him to the Angels for cash, as the Mets are broke. Nieuwenhuis’ career as an Angel was shorted lived, and he was designated for assignment after playing only 10 games.

Apparently, the Mets were feeling nostalgic and decided to reclaim and later promote their old friend. Little did they know that he'd later make Mets history.

Amidst a streak of 414 dinger-free plate appearances, the Metropolitans had a blast of series against the Diamondbacks. Besides sweeping the three-game set, the Mets hit nine round-trippers, which accounted for all their RBIs for the weekend.

The highlight came from our AAAA hero, Captain Kirk, who slammed not one, not two, but three homers in one game. Nieuwenhuis hadn’t gone yard the entire season, but he wasn’t going to let that get in the way of history.

Most Mets fans will assure you that Nieuwenhuis will have more three-punchie games than three-dinger games. In fact, they'd lay money that he'll likely end up back in Triple-A again in the near future if Bovada would ever post a line on it.

But at least, Kirk Nieuwenhuis now has his name up there with other Mets who've accomplished notable one-off feats, such as RA Dickey being the last Met with 20 wins.

Nieuwenhuis will never get in a plaque in Cooperstown on the mertis of his career, but at least he can always hang his hat around the fact that his name will be the answer to a trivia question for years to come.