Ug! Is This All Giants Get before the Trade Deadline? 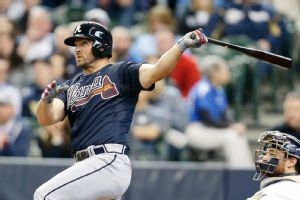 Giants fans sometimes may question the wisdom and logic of the often impeccable Brian Sabean, who could be characterized as a kind of more genteel version of Billy Beane.

Sabean is known --like his needy counterpart across the bay-- for getting optimum mileage from fixer-uppers.

Here he is, on the left, in a quiet moment with his cross-bay counterpart. At least, it appears to be serene. Are they scheming and plotting a transaction? In a tale of two cities, those upstart  A's have usurped the Orange & Black's place as the most successful franchise in the majors in terms of winning percentage so far in this exciting 2014 baseball season.

Will Sabean finally pull the trigger on those superstar acquisitions that have paved the road to baseball immortality for the Giants? Or will he sit idly by -- like last year -- and sneeze at the trade deadline?

If he goes with the status quo, can San Francisco still realistically compete for a playoff berth?

There seems to be a number of terrific buys in the clearance section right now. Can he orchestrate yet another of his mid-season strokes of genius or, conversely, another of his well-publicized blunders?

And which one will this move be? Sabean and the Giants have again gone with an Everything's-a-Dollar retread in the person of Dan Uggla.

San Francisco's faithful vigorously hope that a fresh start for the veteran in a city renowned for fresh starts will bring about a Morse-like resurgence.

Maybe the Ugger was just a victim of those incessant Tomahawk Chops -- stolen from Florida State, I might add -- that negatively impacted his psyche to where it hurt his timing in the field and at the plate. A whiff of that refreshing McCovey Cove air should do wonders for the lad.

We can almost detect the sweet salient strains of Uggla performing a Karaoke of the ABBA hit. Uff da!