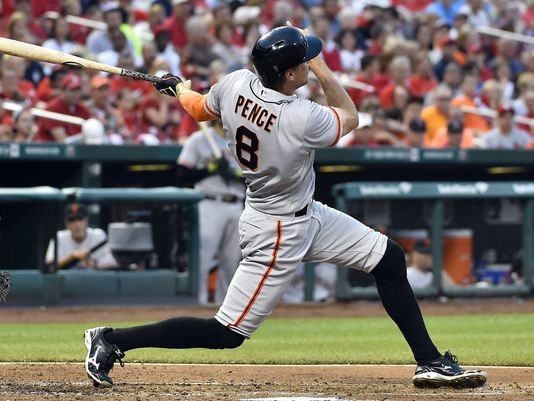 So, there the San Francisco Giants were, on a roll in St Louis.

They'd just finished adding to Shelby Miller's woes in the first game of the series and destroyed ace Adam Wainwright in the second.

And then the Cardinals called up their top prospect from AAA Memphis to bolster an offense that's been sputtering all season long.

Oscar Taveras wasted no time going deep, and the Giants' hopes of taking three in a row from the defending league champions were deep-sixed.

Not bad for an undrafted 21-year-old in his first game.

Oh, well. For the fans of Orange & Black, better to live with recent memories, like Game 2.

Two-thirds into it, the Giants had the Cards on the ropes. After removing their star catcher and one of their best hitters, St Louis walked Morse to face Sanchez with the bases loaded and nobody out. Bad move.

It was Wainwright's first shellacking of the season as this clash of division leaders was definitely tilting toward the Pacific. The Giants had their mojo working, big time.  Manhandling the perennial division, league and frequentWorld Champions to the tune of a 9-0 score by the top of the seventh inning was a clear statement.

Madison Bumgarner, en route to his seventh win of the young baseball season, was magnificent as usual during his seven shutout innings.

However, that notable fizzle from the Giants offense in Game 3 of four between these two contending clubs brings the team a little --but only a little -- back to earth.