Published on 9-Apr-2016 by Alan Adamsson 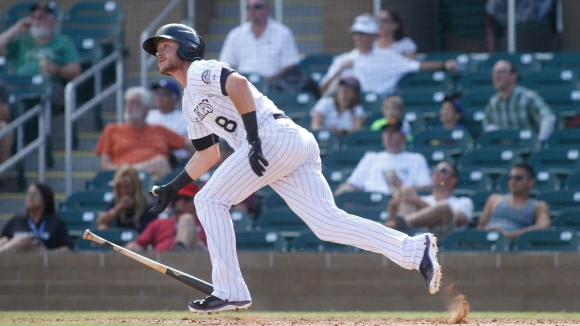 One of the major deals at last season't non-waiver trade deadline was the Colorado Rockies sending face-of-the-franchise Troy Tulowitzki north of the border.

Needless to say, Rox GM Jeff Bridich was either a rube or had a clue what was coming from the farm.

That answer was revealing itself in spring training:

Well, as the Chambers Brothers said and the Ramones repeated, time has come today.

And it just keeps on coming.

Dude popped a couple more in Phoenix to put himself in the record books: And then, Story finally got a chance to see what hitter-friendly Coors Field was like.

What's more, dude can pick it.

Seems like the only thing Story's missing is Reyes' contract.

Virtually every ballplayer has hot and cold streaks during a season, but it doesn't hurt the Rockies' box office or Bridich's reputation to have the rook light it up early.

What's promising here is Story's blasts have come from a variety of pitches in different regions of the zone. He's got oppo power, too, which keeps sequences and defensive sets honest.

Humidor or no, Story's got half his games a mile above sea level, so until or unless opponents find his cold spots, dude's promising future has suddenly become a productive now.