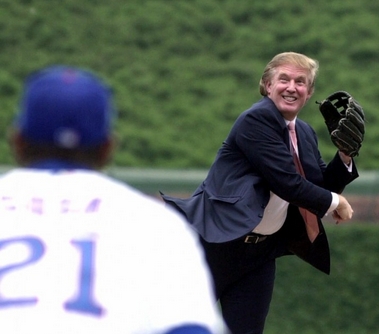 Even the Redbirds' most hardcore haters of their rival to the north will admit that the Chicago Cubs were pretty damn good last year, and there's every reason to believe they could be better this year.

So where does the master of alternate realities get off dissing that Fuzzy Wuzzy franchise?

Where else? Dissent. Can't have that.

It started about a month ago:

Right-on-Right violence is an ugly thing.

As to the Ricketts' effect on the Illinois Republican primary, there must've been a ton of White Sox fans voting: One would think Trump would be satisfied with gloating, but apparently, twisting the knife is much more satisfying.

Out of the blue, dude decides to renew the rant during an interview that in no way, shape, or form had anything to do with the Cubs: What's that even mean? The Ricketts family won the only vote that mattered to them when their purchase of the club was approved by MLB owners.

Meanwhile, Trump's staff may want to shove a recent sports page into his stubby little fingers.

If he takes the time to read it, he might discover that most of the baseball world is drooling over the once-hapless Cubbies these days:

According to the hypesters, all that stands in their way from the 2016 World Series title is Cubness itself. 108 years of it.

So it appears like, yet again, Trump and facts aren't getting along.

The Cubs will probably win the big one before Trump does.