Trout Wins Second Straight All-Star MVP, Is Not of This World 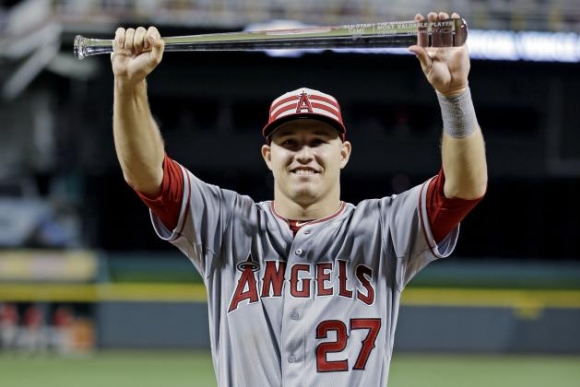 The universe is so vast and ever-expanding, it's truly narcissistic to think we're the highest life forms the cosmos have to offer.

Hell, we actually have definitive proof that there is a superior race of beings somewhere out there.

One of them embarrasses professional ballplayers on a daily basis, right here on good old Earth:

Winning two All-Star MVPs is rare enough; there are only four other men in history who have done so. But none in that vaunted quartet did it back-to-back. Then again, none of them were Michael Nelson Trout.

In his first plate appearance last night, Trout hit a solo home run, as he is typically wont to do. This completed his natural cycle in All-Star Game first at-bats: in 2012, he hit a single; 2013, a double; 2014, a triple. Because, of freaking course he did.

There's no easy way to say this: for all the successes MLB has achieved over the last 25 years, the strike and the steroid scandal were humongous blows to the game's reputation. Even as baseball bounced back, the far-reaching effects of those disgraces are still felt.

Having a clean-cut phenom like Trout, then, does wonder's for the game's public image. In the wake of Jesus H Jeter's retirement, Trout is marketable enough to bail out Greece. It's commendable that the game is now rising to meet him.

Trout isn't the only viable contender for the supposed Face of Baseball: Bryce Harper, Andrew McCutchen, and Clayton Kershaw can all lay claim to the title, with guys like Kris Bryant and Joc Pederson waiting in the wings. They're all eminently skilled and athletic.

But none of them have the monumental talent that Trout does. His endeavors on the basepaths are blinding. Each at-bat is poetry in motion, even those ending in a strikeout. Watching him in the field is thrilling. His style of play is so aesthetically pleasing, it makes Swan Lake look like Lake Wobegon.

Mike Trout is the answer to Edwin Starr's timeless question: "WAR -- Wins Above Replacement -- what is it good for?"

Not in this case. The metric is a fairly strong way to measure Trout's worth: whether you adhere to Fangraphs or Baseball-Reference, the two agree that Trout has been baseball's most valuable player since debuting back in 2012. Good god, y'all.

Maybe in 15 years, we'll look back on this Midsummer Classic as a turning point in an already legendary career. Trout will be making his 19th straight appearance in the contest, and afterwards, he'll be presented with a 2030 Chevy Hover-Impala for his efforts, while Harper stews quietly on the sideline, having to settle for his MVM -- Most Valuable Mohawk -- award.

In summation, Trout is a gift to baseball fans everywhere, descending from the heavens to shepherd MLB into a new era of prosperity.

The City of Angels finally has someone befitting of the title.