Published on 1-Jul-2015 by Trent Jackson 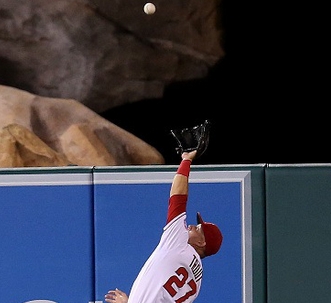 There may be turmoil within the Los Angeles Angels' braintrust, but it hasn't bothered their biggest star.

And yes, Albert Pujols is hot again, but no, he's not their biggest star anymore.

That would be Mike Trout, who's assumed the mantel of the most intimidating batter in the Angels lineup.

He got the Halos' series in the Big A started two nights ago with a solo home run, his 20th shot of the season. CC Sabathia was his server in the third, as New Jersey native Trout gave the Angels a lead they wouldn't relinquish:

Sabathia may have made it through 7⅓ innings, but it wasn't enough in a 4-1 loss. The Yankees' the lack of run support was largely due to Trout. Here's his night of highlights in its entirety:

Trout's deep catches robbed Chris Young of a three-RBI night. So, instead of having an impressive night himself, Young found himself 0-4 instead of being the Yankees offensive hero.

Trout's so good that he's the only outfielder to thwart Kansas City's All-Star box stuffing.