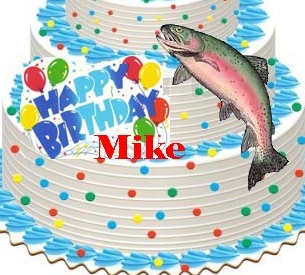 Dude's leads the MLB in WAR -- Wins Against Replacement -- going all the way back to the 2008 season.

Even more impressive, Trout didn’t play a game in the majors until 2012.

He’s also got a Rookie of the Year award and two MVP trophies, as well as three second-place finishes, all of which he arguably should have won.

Even more amazing is the Millville, New Jersey native has done all of this before his 26th birthday.

Odds are the locals back in Millville would've celebrated that occasion with him differently than his teammates:

Not too many people would be happy to have a bunch of dugout detritus dumped on them, but Mike Trout's no ordinary person.

Apparently, that act is a birthday tradition in the Angels clubhouse, the brainchild of Jared Weaver and Albert Pujols.

Speaking of birthday traditions, Trout kept one of his own going during games, collecting his fourth birthday dinger in six seasons.

That birthday bomb wasn't his biggest gift to himself that night.

Earlier, Trout snuck one down the third-base line for career hit number 1000.

This added him to an exclusive club that includes Mel Ott, Jimmie Foxx, and Mickey Mantle as the only dudes to collect 1000 hits, 500 runs, and 500 walks by their age-25 season.

Of course, Trout still plays for a mediocre Angels team.

So he didn’t collect a W on his special day.

It doesn't obscure the inevitability, though, that with each passing birthday, Trout gets one step closer towards GOAT status.