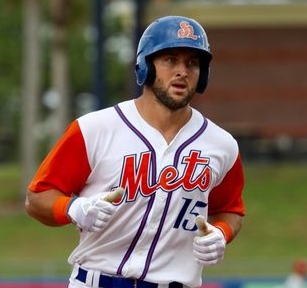 OK, technically, this was dude's second game for the St Lucie Mets.

But it was the back end of a doubleheader, so it counts as part of a trend that's forming here.

He did it again at his latest port of call:

Judging from the backdrop there, the thought that this particular team would still draw flies despite Tebow's presence appears to be correct.

The New York Mets train in Port St Lucie, so the locals had all spring to see the circus.

Frankly, so did most of the Florida State League's fans. In fact, only Osceola County's FireFrogs, Daytona's Tortugas, and the Charlotte Stone Crabs don't play in a spring training venue, so patrons of those clubs had best check their skeds and get their tickets early.

Gotta say, though, Tebow's taking yet another liking to his adopted home state:

Three games doesn't define a baseball player, but maybe dude learned something in Columbia, as in this is still A ball.

Sit on the heaters. The funky breaking stuff doesn't get good until AA.

Until the rubber meets the road, then, it's clear he's got the first day with a new team sorted.

If the big club needs a merch push when September call-ups arrive, they may have found their bopper. For one game, at least.