Tigers Scorched by the Fiery Furnace of Nebuchadnezzar

Published on 6-Jul-2017 by Alan Adamsson 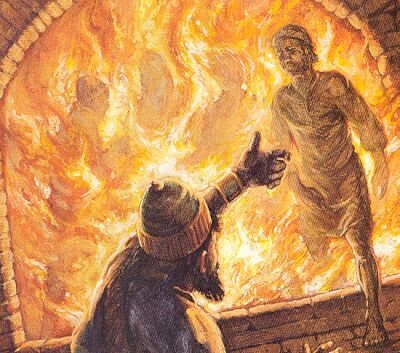 After getting boxed around by the abysmal San Francisco Giants -- dude lasted a cringworthy four innings in Detroit's 5-4 loss -- the right-hander went into scholar mode when the media horde descended upon him after the game.

It's just as impressive that he was still there to do it after a four-inning start.

To his credit, instead of tossing out the same old platitudes that players do in this age of vanilla quotes, the devout Norris surprised them with the ol' Fiery Furnace of Nebuchadnezzer maneuver.

That happened in the age before sabremetrics, so here's a refresher:

Distractions are almost always effective at changing the subject, and who's gonna challenge a dude on his beliefs?

Norris's point was uplifting but still slightly obtuse, given his season to date:

If only God was in the Tigers' rotation.

Unfortunately for the Tigers, the other thing that's up in flames is their return on the David Price trade.

Coincidentally, they received three young men in the deal:

Today, the Tigers put Norris on the DL, ostensibly for a groin strain, but in reality is a fish-or-cut-bait decision for their front office.

Don't know about a furnace, but right now, dude's thisclose to the baseball equivalent of being fired by Detroit.