Tigers Give Valverde Another Shot at Blowing Saves 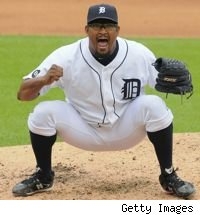 It's so wonderful to live in a forgiving society.

And given the City of Detroit's issues these days, forgiving is the word du jour.

Who knew this humanitarian attitude would extend to the Tigers?

Jim Leyland & Co have an apparent burning desire to use the most inept pitcher possible as their closer.

Detroit began the season expecting walk-machine Bruce Rondon to be the closer, but quickly sent him down to the minors when they realized that he only knew how to aim for the batters' boxes and not home plate.

The Tigers have since been using a closer by committee, but it's been far too effective, only blowing three of its first six save opportunities. The organization felt it was time to make a change, so they went out and signed the worst possible pitcher they could find. José 'Papa Grande' Valverde, who sported a downright horrible 1.78 K/BB ratio last year, has returned to Detroit.

Valverde was hideous in last year's playoffs, often struggling to do much more than balance himself on his own two feet. The Tigers have some decent relievers in Joaquin Benoit and Al Alburquerque, but they prefer Valverde's incompetence over both options and decided to reinstate him as the closer.

It's not like Dan Duquette didn't see another season of late-inning headaches coming. Others did long before him. And yet ...

Papa Grande is back, and the Tigers are now quite capable of losing roughly every game in which he pitches in for the rest of the season.

Detroit fans may need to be über-forgiving all summer.