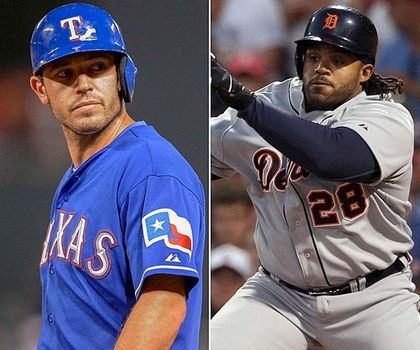 When it comes to old school, star-for-a-star Hot Stove League trades, the Detroit Tigers and Texas Rangers weren’t just going to sit on their hands this off-season.

No, these two currently consistent contenders went out and got something done.

The Tigers traded Prince Fielder to the Rangers for Ian Kinsler, a trade that frees both teams up quite a bit from both payroll and personnel perspectives.

The Tigers dumped a huge load off their shoulders -- literally and fiscally -- by shipping Fielder and his $168million salary to Texas, while shifting the defensively-challenged Miguel Cabrera to his natural position at first. GM Dave Dombrowski also figured Detroit's top hitting prospect, third baseman Nick Castellanos was ready for The Show. The impact on their offensive production thus remains to be seen, but the move significantly improves their defense on the left side.

Money also figured into the equation. Detroit now has an extra $168million to spend, and you can bet a whole lot of that will go to Cy Young award winner Max Scherzer. For the Tigers, shifting Fielder is nothing but a win-win.

The Rangers get a huge benefit, too. Texas receives a big power bat at first base along with $30million from Detroit to offset the salary disparity between Fielder and Kinsler. The addition of Fielder will make their potent lineup that much more frightening -- imagine a starting nine including Fielder, Adrian Beltré, and Nelson Cruz. Furthermore, Jurickson Profar finally has an infield position.This will give him the playing time he needs to justify his ranking as the top young prospect in baseball.

Rangers GM Jon Daniels is very excited to add Fielder to the roster, and really, who wouldn’t be?

”Obviously, a very exciting trade for us in adding Prince Fielder to the organization,” Daniels said. ”Also a tough trade to make in that Ian Kinsler’s been with the organization since he was drafted in `03, and we’ve signed him here a couple of times. Been here, a catalyst for our World Series clubs, and a huge part of this.”

Most analysts thought the pickings would be slim this off-season. Money is available, but top-flight free agents were few. However, no one saw headliners like Fielder and Kinsler exchanging uniforms, so perhaps surprise will be the theme this winter.

And it may be the Rangers creating another one. Second base is open. If their wallet is, too, Robinson Cano could be interested.