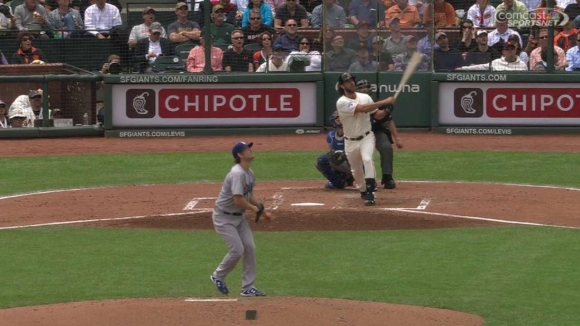 After a blistering pace shot them into the division lead to start the 2015 season, the Los Angeles Dodgers are beginning to sputter.

Brooms were brandished at AT&T Park as the defending World Series shamps swept the West Division leaders out of town without so much as a run scored.

In any of the three games.

In the third scoreless humiliation in as many days for the City of Angels bluebloods, the MadBum won his fifth game and provided all the firepower that would be needed.

Sealing his place as the new ace-of-aces in the National League by banishing Clayton Kershaw to a sub-500 winning percentage and an ERA over 4.00.

What's more, with that blast, Bumgarner tied the likes of Robinson Canó for home runs this season.

And so, the Orange & Black clinched their sixth win in a row. They're a mere 1½ games behind the Dodgers in the NL West with lotsa season left to go.

Seems like a spirited title defense is just getting started.

And G-fans are so excited they can hardly contain themselves.