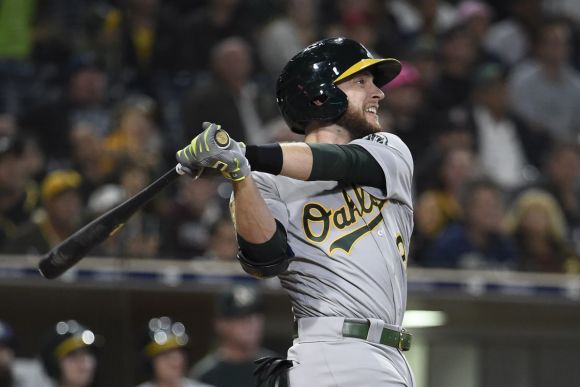 When the video review of Mark Canha's drive down the left field line in the eighth inning was confirmed to be a fair ball, the Oakland Athletics had done it again.

His two-RBI single thus completed a come-from-behind effort that produced a 6-4 victory.

It's the MLB-leading eighth time dudes have done that after trailing in the seventh inning this season, one of those red-headed stepchild stats that can warm the left cockle of a seamhead's heart.

Then, a strange thing happened.

This collection of soundly skilled ballplayers at Moneyball's Ground Zero. Dudes started acting like they were the 2002 A's. From 15 June to now, Oakland's gone 19-5 and forced their way into the AL Wild Card picture.

Oakland's hot streak hasn't just come from cupcakes. The A's have won two series against AL Central leader Cleveland -- 4 of 6 -- and this 3-of-4 effort against the 'Stros.

Dudes kinda look like the 2002 squad at the plate. They're into plate discipline, big time. As core contributor Jed Lowrie puts it, repeating an old adage:

You can be beat by a pitch, but you're not going to beat yourself on a bad pitch.

Toss in pitching that's firing on all cylinders and a better-than-adequate defense, and that's the A's approach.

The AL West is interesting so far this season:

Despite the club's sad-sack image, Oakland knows its way around the MLB financial world and constantly makes money.

Given that the Oakland-Alameda Coliseum is a total carbuncle -- thanks, Prince Charles -- and the team annually lags in attendance, that's still the most impressive thing about them.

The A's still have to show they can keep this up for a full season. If they do, dudes will no doubt have the powers that be shaking their heads even more by making both big bucks and the post-season.