Thom Brennaman Can No Longer Contain His Frustration with the Reds 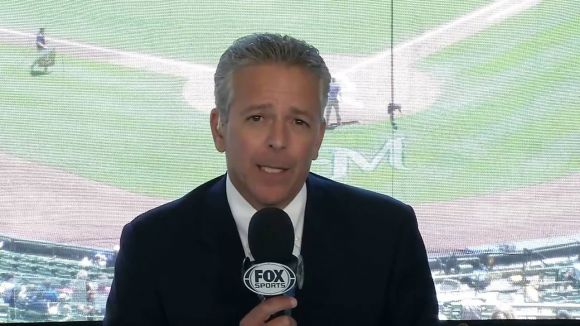 MLB home team announcers are the gift that keeps on giving all season long.

Of course, some are more entertaining than others.

It's particularly gratifying when they get super-frustrated with the product on the field.

Enter Cincinnati Reds broadcaster Thom Brennaman, whose audible sighs can be heard throughout the Midwest:

While he managed to refrain from using profanity, the excitable son of Marty did have something of a meltdown after watching Kris Bryant gut punch his Reds late in the game.

You don't need an alarm clock. You just need Kris Bryant homering, as called by Thom Brennaman of the Reds' broadcast. pic.twitter.com/XsjFVTavZk

That three-run jack put the Cubs up, 5-3, in the 7th inning and appears to have broken Thom's spirit.

That was a glorious little tangent, complete with the repeated unbelievable and a pen toss for good measure.

Brennaman was particularly displeased with reliever Michael Lorenzen, whom he accurately and angrily described as not having recorded an out during his brief appearance.

While Thom is clearly not pleased with the Reds at the moment, this pales in comparison to the bile he's collected over the Cubs.

You may recall the following apoplectic fit he experienced back in 2016 when the Cubs and their fans had the temerity  to keep scoring and cheering at the Great American Ballpark:

Brennaman closes his rant about the Cubs fans (featured below): "Enough already." pic.twitter.com/9lPWyGp41W

The enough already was just the perfect punctuation for that unhinged spiel.

This is all the more perplexing when you realize that Thom rennaman was once in the employ of the Chicago Cubs.

That sounded like a good time was had by all.

Also interesting is the fact that Brennaman appears to loathe Bryant, the entire Cubs fanbase, and himself, yet feels sympathetic towards the troubled Addison Russell.