This Time, Giants Rise Above the Maddoning Crowd 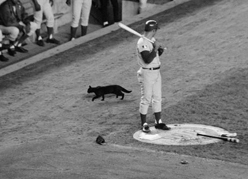 A century-plus of accumulated losing seems to be on the ropes in 2015.

The team that plays in Wrigley Field -- the house that the monarch of mastication built -- is on fire and in the very thick of the race to post-season play.

But Chicago Cubs fans must beware not of lions nor tigers, but the black cat:

Surely, there's no other club in the world that has to battle as many curses as the Cubbies.

As if that's not enough to put a pre-winter chill on Windy City dwellers' optimism, lurking beneath all their grandiose hopes of baseball glory lays this eternal Midwestern conundrum:

Can the Cubs finally buck the losing trend that is their past and free themselves from these curses?

Goats, for one, won't go gently into that good night.

Chicago's road to deliverance from the goat, et al, will probably require them to first carve up their nearest Wild Card competitor, the thrice-crowned San Francisco Giants.

In fact, the last time San Francisco lost a World Series, Dusty Baker was their manager.

And guess who was managing the Cubs during the Steve Bartman game.

So neither team is a stranger to manifest Dustiny.

After a four-game sweep of the Giants in Chicago earlier this month, the Cubbies gave a couple of games back, dropping two of three in San Francisco, including today's rubber match, 9-1, as Madison Bumgarner was Madison Bumgarner.

The net result, then, is the Orange & Black reeled in two games in the last two days:

Weighed down by injuries to their fragile core of aging veterans, the Giants could use a dose of goat in Chicago's path right now.

There are slightly more than five weeks remaining in the season. And these still are the Cubs. Stuff happens.