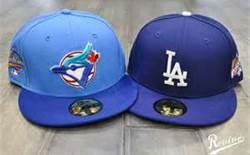 One of the 2013 season's story lines may well be Old School vs New Money as the Toronto Blue Jays and Los Angeles Dodgers have become Bovada's leaders in the pre-season clubhouse to meet in the World Series.

The Jays are on the books at an AL-leading 8:1 while the Dodgers are the NL pace-setters at 6:1.

Why this match-up will happen:

Magic Johnson, his consortium, and a kajillion-dollar TV contract have made the Dodgers a force in the world's eighth-largest economy. (Yes, that is how the state of California alone stacks up against all comers.) They're swimming in so much cash and are so willing to spend it that they may have enough left over to also win the Stanley Cup and whatever the NBA uses for a trophy these days.

Look at the top of their rotation: Clayton Kershaw, Zach Greinke, and Josh Beckett. Then there's Chad Billingsley, who by all accounts has recovered from his torn right elbow ligament without any surgery.

Even casual fans will instantly recognize the power in LA's line-up: Matt Kemp, Hanley Ramirez, Adrian Gonzalez. Add the likes of André Ethier, Mark Ellis, and AJ Ellis, and the Bums will feature a daily gauntlet to opposing teams that will provide consistent production.

North of the border, Toronto general manager Alex Anthopoulos must have thought he was in his own fantasy league. To José Reyes, Mark Buerhle, Josh Johnson, and RA Dickey, he must have looked like a one-man Navy Seal Team Six, rescuing them from the clutches of owners who deployed doomsday scenarios of deceit for any player under contract to them. Do know they'll be motivated by the chance to play for something meaningful this year.

José Bautista, Brett Lawrie, and Edwin Encarnaçion must still be pinching themselves, gaining a table-setter like Reyes and run-reducers like the new starters. Now, their already potent offensive production can be enhanced and made to stand up in more games than they've ever known in their careers. Casey Janssen might actually be a closer in more than name only, as an already solid bullpen now has increased possibilities of delivering many more opportunities to him.

Why this match-up will not happen:

Money doesn't always buy happiness, and it is even less reliable when it comes to buying titles. See Angels, 2012 season. The Dodgers still have some issues to address.

Look at the balance of their rotation: Hyun-jin Ryu and Aaron Harang. Then there's Josh Beckett and Chad Billingsley; are they really going to bounce back to their glory-day forms?

Look at the bullpen. Then again, don't. There's not much there on the way to closer Brandon League. Innings Six through Eight could well be an adventure every night.

Meanwhile, there is still room for anxiety in the Great White North, starting with the Baltimore Orioles. Conventional wisdom in some quarters says their 2012 season was a dream sequence; their starting pitching and collection of emerging stars may say otherwise. It looks like the Orioles are about to begin a run of perpetual title chases.

Adam Lind and Colby Rasmus need to step up and be consistent about it. If their talent doesn't mature, the heart of Toronto's order won't be able to afford any lingerling lapses, afflictions that are rarely avoided during the course of anyone's season. Both Lind and Rasmus have to prove they're not vulnerable to left-handed pitching.

Last season's tandem of 'aces' -- Brandon Morrow and Ricky Romero -- were key culprits in the Jays' mediocrity. They need to stabilize their performances or the back of the rotation will be a horror show.

Finally, based on recent seasons, the specter of a Series run would be a relative novelty to both teams. Their clubhouse culture will need leaders who can keep their teammates focused for the long haul. That's easier said than done on teams who have been out of the mix for a while.

So, which is it to be, then? Will they or won't they. Indications are that both teams will have prices to pay if they don't perform to expectations.

It says here that Old School gets the job done if it can dodge the Tigers. New money goes wanting. See Angels, 2012 season.