This Just In: Bartolo Colón Is a Full-Service Athlete

Published on 6-Sep-2015 by Alan Adamsson 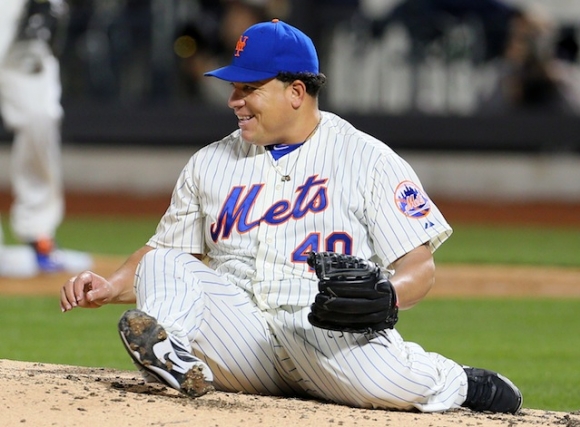 There's no longer any doubt about the phenomenon of Mets magic wafting in the air this season.

And so much is made of the fact that much of that prestidigitation is originating from their young arms.

But make no mistake, New York's pitching staff has a wily old veteran serving as it anchor, in every sense of the word.

That'd be none other than that round mound on the mound who's a perpetual motion pitching machine with the sort of mechanics that no classically-trained pitching coach would ever teach:

Bartolo Colón's been around long enough to become the first pitcher in MLB history to beat a team -- Baltimore's Orioles -- while pitching for seven different teams; he never faced them while hurling for the Expos in 2002.

Dude's won a Cy Young early in his career and drawn a 50-game PED suspension later in it.

And throughout, no one ever confused him with Dorian Gray. The Mets wouldn't be where they are today without Colón and his 170 innings, complete with 127 punchies and only 21 walks. In fact, the portly Dominican set a team record for consecutive innings without issuing a free pass. Currently, dude's not allowed a run since 21 August, which spans three starts and a ninth-inning relief appearance.

And yet, this is the image he's had to beat these days:

But give the dude credit for working on becoming a well-rounded player:

And now, Colón has enhanced his image as the man, the myth, the legend with feats of catlike quality.

And yesterday, Colón made the second-coolest fielding play by a pitcher in the color-media era:

But give Colón time. The season's not over yet.