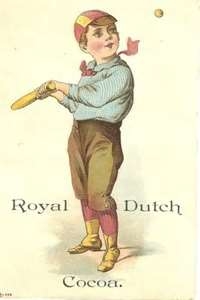 For the record, they do speak Dutch in Aruba and Curaçao.

And right now, they're speechless in Cuba.

The Netherlands is one win away from a trip to the World Baseball Classic's championship round by virtue of its 6-2 victory over a perennially strong Cuban contingent. If they do it for the first time in their history, the feat might even make headlines in Holland.

Its legacy as a naval superpower landed the Dutch in the top tiers of baseball's hierarchy -- it's also the root of the term Yankee, but that's a complete story for another day -- due to the game's popularity in the Caribbean. However, baseball does have a notable history in the homeland itself. There is an annual championship inn European baseball, and a relatively strong Dutch national league provides the players for Holland to dominate it.

A handful of Dutch nationals have made the major leagues, with Bert Blyleven possessing one of the best curveballs in the game's history and earning a plaque in the Hall of Fame because of it. Blyleven is the Dutch team's pitching coach in the WBC, and it shows. He's a fierce advocate of pounding the zone to keep pitch counts down, and with the 65-pitch limit in the WBC, this can well be an effective strategy.

The Dutch pitching staff has issued few walks in the competition to date, which is one reason why the Cubans could bang out 12 hits and only score two runs. One walk allowed and four grounded double plays will do that.

Eligibility for rosters in the WBC are nebulous at best, but the Netherlands rarely draws on the gray areas. With the talent being produced in their Caribbean sphere of influence, such as shortstop Xander Bogaerts, they have no need to do so. However, when the homeland is directly represented on the roster, it's done so in dynamic fashion. The Dutch are destined to claim the tallest player in major-league history when 7ft-1-in RHP Loek van Mil ascends to the Cincinnati bullpen. He's closing for Holland in the WBC, and when he returns to the Reds system -- they signed him in the off-season -- his newfound 99mph fastball could make some noise.

Right now, though, the focus of van Mil and his teammates is to see San Francisco in a Netherlands uniform. Maybe Holland's legendary seafaring explorers never made it to McCovey Cove, but if they get there, this version of a Dutch invasion is intent on making their presence a real splash.