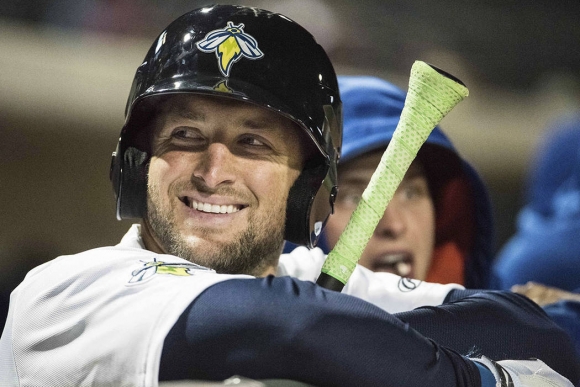 This is the business of baseball at its thrilling best.

Sure, MLB dreamer Tim Tebow was only hitting .222 with 3 dingers and 22 ribbies.

That's clearly not what earned him a promotion.

What likely did was the fact that his Columbia Fireflies had hit every other city in the Sally League. Nothing more to see.

Now, teams in the Florida State League get their shot at a bulging gate when the St Lucie Mets come to town.

As the New York Mets' spring training complex is in Port St Lucie, it could well be the locals won't be into reruns.

So, officially, how's the Metropolitans' front office papering over this move?

There you go. Blame it on the seamheads and their advanced metrics.

Even those dudes are probably crunching all his numbers on a cash register.

Whatever the standard New York uses to measure Tebow may be, it says he's on a roll. In the last two-plus weeks, dude's slashed .327/.413/.436 and added a triple to four doubles.

For the record, High A -- also called Advanced A -- is three levels away from The Show. This is quite often where draftees who played at major-colleges begin their quest to the bigs.

Like the other levels of Class A and the Rookie leagues, it's overpopulated with fireballers and warclubbers. Those who actually survive it and move up to AA begin to truly absorb the finer skills that separate major leaguers from mere mortals.

And don't you forget it!

Just like Tebow won't forget the only Firefly two-run single he ever grounded through the hole on the right side:

It's not outta the question to see the Mets move him to AA sometime this summer, because that's where they'll really be able to assess if he's actually got a snowball's chance to keep the dream -- and the merch -- alive.

There's still one skill set he's got that's MLB-worthy, though.

Dude knows who's putting bread on the table, even on his last day with the Fireflies: