The Swap-Meet Series: BoSox to Face Old Friends in Dodgers 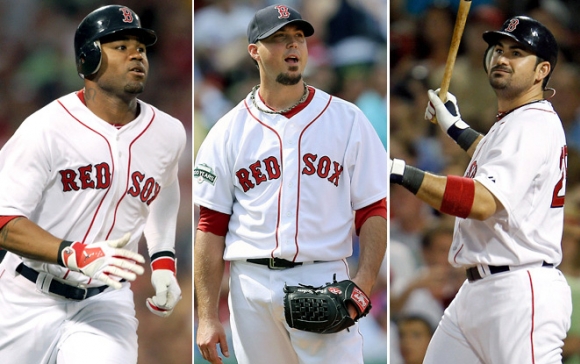 No, this weekend is about proving to the baseball world that last year’s mega-trade to the Dodgers was the right decision.

Starting today at Chavez Ravine, the Sox will face three of their old friends who were shipped to the Land of Dodger Blue: Adrian Gonzalez, Carl Crawford and Josh Beckett.

Much of the scenery in Boston's clubhouse has changed since last August. The Sox dumped Bobby Valentine for John Farrell and have soared without their former star players. Since then, the Sox have remade themselves into a winning team with good personality and will have a lot to prove, starting tonight.

Both teams are the front-runners in their respective pennant races. After the mega-trade last season, the Red Sox dive-bombed into the bottom of the AL East, and while the Dodgers seem to have benefited thus far, the deal for Boston was more along the lines of addition by subtraction, in both payroll and personalities involved.

Over the off-season, the Sox brought in assorted 'good guys' and have now become one of the elite teams in the MLB. Now, as much as anyone in the Boston organization might deny it, they'll hope this weekend to prove to a few of their former players that they don’t need them to be successful, that bringing in star talent last season was the biggest mistake they’ve made in years.

Carl Crawford sensed the gravity of situation as he expressed his thoughts to the media, mainly that he wants to win more than anything.

"I want to win all three games. Bad," Crawford said.

Adrian Gonzalez may have been well on record for his apathy and anger towards Boston, and like Crawford, he's looking forward to making this a tough weekend on the Red Sox.

Los Angeles continues to be the hottest team in baseball, so a sweep of the Sox is more than a pipe-dream possibility. At 75-52, the Dodgers are two up in the loss column on Boston and feature some of the best pitching in baseball.

So both teams have something to prove. For the Sox, it’s that they are better off without Crawford and Gonzalez, and for the Dodgers, it’s that the Sox will be sorry they let three good players walk away for basically nothing.