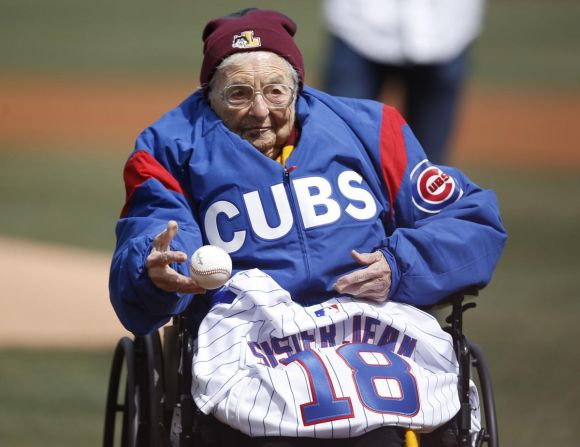 March Madness has come and gone, and Loyola-Chicago's Cinderella season finally ended in the Final Four.

However, it appears the beloved Sister Jean is still with us.

The 98-year old nun and beacon of hope for one and all seemingly inspired the Ramblers and millions of viewers worldwide.

Honestly, how she did thisremains unclear.

Her inexplicable run of pop culture relevance continued at Wrigley Field for the Cubs' home opener.

Sister Jean was invited to throw out the ceremonial first pitch:

Well, throw is being charitable. That was more of a feeble push.

Obviously, it doesn't require much physical exertion to make a difference.

If you recall, her contribution to the Ramblers' historic tourney run mostly involved being wheeled into and out of the arena, with the occasional leading of a prayer circle for good measure.

Anyway, it seems we haven't quite reached the oversaturation point for this college hoops muse just yet.

The reality tour is still petering along.