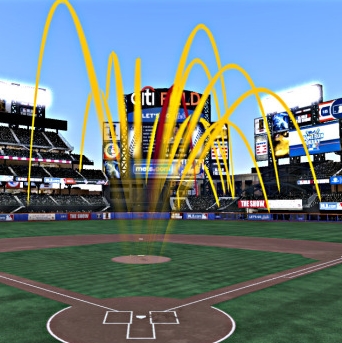 With the Memorial Day Holiday today, the MLB docket is full.

Your favorite Shot Dude has some fantasy advice for the games that start a bit later, so you have time for your morning celebrations.

Please check the starting lineups to make sure these players are in if you are following my lead.

You can get the low down on all games every day with the help of the Bovada data tool on our Home page:

The smart people at FanDuel have adjusted to the MLB slate with four different game sets. All my suggestions come from the late set, but you play the one you like.

Tanner Roark, Washington ($8300) ... is coming off two straight quality starts and is in the best spot to get a win among the late-starting hurlers. Roark faces Philadelphia tonight and just defeated them on28 April. Dude put up 39 fantasy points in that win, and I like him to go at least six innings with six or seven punchies in this one.

JT Realmuto, Miami ($2300) ... has been so productive for the Marlins, they've been hitting this dude in the cleanup spot. Realmuto is anything but a household name but has right hits in his last nine games with a .294 batting average coming into tonight's clash against Pittsburgh.

Chris Johnson, Miami ($2000) ... has been drawing starts against lefties and should hit sixth tonight against Jeff Locke. Johnson is a minimum salary player that will help you include higher-priced hitters in your fantasy lineup. Dude's 7-for-15 with two home runs in his career against Jeff Locke.

Daniel Murphy, Washington ($4100) ... is ripping the cover off the ball with his current .387 batting average. In his his last 10 games alone, Murphy has 14 hits and driven in five. Dude's most likely to hit fourth after Bryce Harper against the Phillies tonight.

Jung Ho Kang, Pittsburgh ($3700) ... has 9 hits and 9 RBI in his last 10 games, even after an 0-4 collar yesterday. Manager Clint Hurdle is still trying to ease Kang back into the lineup, so you could start David Freese if he gets the nod instead. Both hitters have been batting in the fourth or fifth spot in the Pirates lineup.

Bryce Harper, Washington ($3900) ... is one of the sluggers I like to go off tonight. Harper has 3 hits in 6 at bats against Jeremy Hellickson, along with2 stolen bases. Dude's also hit in four straight games, including two home runs. Starting to heat up, and under $4000; yes please!

Michael Saunders, Toronto ($3900) ... will most likely be the only true left-handed batter in the Jays' lineup against Yankee righty Ivan Nova tonight. Dude's faced Nova six times with two hits and a walk against him. Saunders is batting .292 with 9 homers and has scored 25 times this season.

Starling Marte, Pittsburgh ($4100) ... has 13 hits, 5 RBIs, 5 runs scored, and 5 stolen bases, all in his last 10 games. Dude's been a production machine! I see no reason why this awesome hitting display should stop, or why Marte won't be batting fifth for the Pirates again tonight. Your favorite Shot Dude hopes you have a great time with friends and family today and make a few dollars too.

Refrigerate leftover food promptly, and always give it your best shot!