The Shot Dude: Calling My Shot 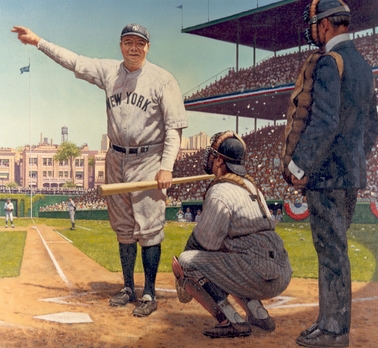 I'll never claim to be one of the greatest like the Bambino, but I'll give it my all.

Today's baseball landscape is vast, with 15 games spread throughout North America. The fantasy team I've assembled here is just a guide; please check lineups and weather to make sure your batters are starting today. The worst feeling is losing your contest just because the other guy did a bit more preparation.

A great start is checking out the MLB schedule with the help of the Bovada data tool on our Home page: FanDuel, the king of daily fantasy sports, has many different fantasy contests to enter. Get over there and assemble a winning lineup as soon as you're done here.

Matt Harvey, New York Mets ($10,700) ... has had seven days of rest since his first outing. Many were surprised he made that start after dealing with blood clots, but Harvey gutted out a less than stellar performance against Kansas City. I think many will look at those numbers and fade Harvey today. Dude's pitching at home against the punchless Phillies, a team that is off to a 1-4 start.

Nick Hundley, Colorado ($3300) ... is my designated Rox jock playing at home. It's best to get at least one in your lineup, because these are often the highest-scoring games. It also doesn't hurt that Hundley is off to a nice start with five hits in 15 at bats, including a home run.

Lucas Duda, New York Mets ($2700) ... is part of my four-player Mets stack today. As in hockey, stacking maximizes the scoring potential of your fantasy lineup. It's not for everyone, but I incorporate a stack almost every time I play MLB. Duda should be batting cleanup today and have a shot at driving in multiple runs.

Ben Zobrist, Chicago Cubs ($2800) ... was the Cubs' most important pickup this past off-season. Zobrist plays multiple positions, is a defensive stopper wherever he is on the diamond, and is a staple in the 3-hole offensively. Dude's off to a tremendous start with 8 hits and 4 walks in 24 plate appearances.

Anthony Rendon, Washington ($2900) ... should be hitting second for the Nats today against Miami starter Tom Koehler. Rendon has a career .471 OBP in 17 plate appearances against Koehler, so he should be in position to score a few today with Zimmerman and Harper hitting behind him.

Alexei Ramírez, San Diego ($3000) ... should benefit from the Rocky Mountain air today and has a hit in each of the previous two games in this series. Dude's due for a breakout game, and Chad Bettis should scare no one. Bettis walked three and gave up five runs in 5⅓ innings pitched in his opener.

Yoenis Céspedes, New York Mets ($3800) ... has 2 career hits in 6 at bats against Jeremy Hellickson, who could be in for a long day if my stack comes through. Céspedes had a strong spring training but is off to a slow start so far. Dude's bound to knock in a few today.

Curtis Granderson, New York Mets ($3200) ... has a dinger off Hellickson and, hopefully, will do it again today. Dude's also had a couple of walks and a stolen base the few times he's faced the Phils' starter, so I think he'll set the table quite well here. There are plenty of stacks to exploit today, but I'm rolling with the Metropolitans.

Alex Gordon, Kansas City ($2500) ... has a very affordable price due to only having 2 hits in 4 games. Dude's also walked twice and scored twice, so I'm not worried that a hot streak is coming soon. I really like that he's 5-for-15 lifetime against Ricky Nolasco and will be at home to face him.

Your favorite Shot Dude sincerely hopes you also take a shot at fantasy MLB games, and you have a winning day. As you round the bases and head for home, always give it your best shot!