The Rebirth of a Legend? 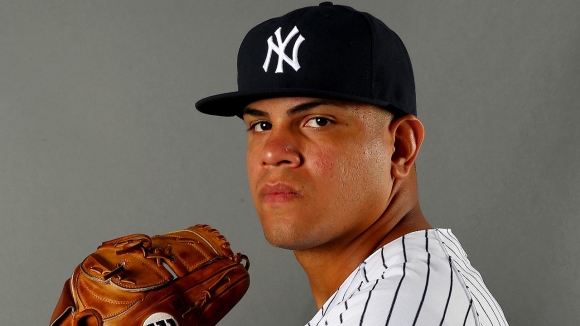 Dellin Betances is a star.

I don't know who can deny it. He might not get the recognition he deserves, since he's not the closer (yet), but he's undoubtedly the best set-up man in all of baseball.

In Betances, rookie season last year, he threw down a 1.40 ERA over 90 innings. The lowest ERA Mariano ever posted in his outlandish career was 1.38 in 78.1 innings.

Remember, too, the Yanks tried to make Mariano a starter his rookie season, and he didn't assume closer duties until his third Major League season.

Andrew Miller is playing like a stud right now, but during his current DL stint, Betances has gotten his first taste of closer duties. He converted saves in each of his last two appearences, even grabbing a five-out save in his last game against the Marlins -- where he struck out Giancarlo Stanton looking.

The best part is Betances is he's a home-town boy who grew up right there in the Big Apple. I have to imagine there's nothing quite like being able to be a star for the team for whom you grew up cheering.

You just have to hope he doesn't pull a Joba Chamberlain.

Once thought to be the next Roger Clemens, it only took a few seasons for him to prove that there was a lot less rocket in that arm than he originally showed. Soon enough, he was booed out of the city and had to find refuge with the Detroit Tigers -- where he hit the Captain in one of his first appearances back in Gotham:

It may be too early to tell. That's what happened to Joba. He had so much promise and generated so much hype that when he failed, he faced a plethora of remorse from New Yorkers. It was almost like he lied to his people and was never forgiven for it.

Now it's time to see if Betances can sustain this kind of success.

Mariano dominated for 19 season in pinstripes. Betances has almost one-and-a-half seasons under his belt. If he can sustain these numbers and assume the closer role when Miller moves on, the Yankees may be able to say they had the two greatest relievers of all time.

But that will be a long ways down the road. He still hasn't gotten a taste of any playoff action yet, so it remains to be seen if he can step up when the heat is really on.