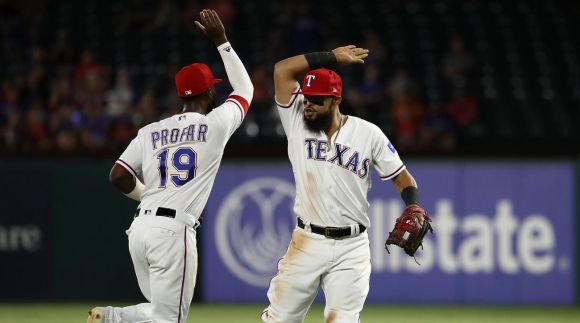 Baseball can be so wonderfully strange sometimes.

The Angels were visiting the Rangers and threatening to blow the game wide open when something very unusual went down.

Get a load of this:

You don't see this every day. pic.twitter.com/6MPPS5u5Xo

No, you really don't.

The comedy team of Jurickson Profar and Rougned Odor, while not only possessing two of the best names in organized sports, also displayed some remarkable awareness.

With everyone in the building completely flummoxed, most notably the Angels' baserunners, this fundamentally sound duo turned the bizarre triple without even retiring the batter.

And just how rare is this?

In the 4th inning tonight, the @Rangers turned a triple play against the @Angels without retiring the batter, David Fletcher.

It was the first MLB triple play without the batter being retired since June 3, 1912, when the Dodgers did so against the Reds.#TexasRangers

So pretty rare then.

The Angels seemingly never recovered from this traumatic experience, allowing four runs in the eighth inning and losing, 8-6.

While we don't have footage of that wacky triple play from 1912, we can provide some more recent moving pictures of similar nonsense: