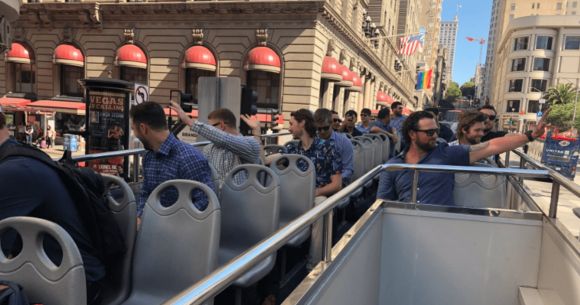 The Padres and Giants played a pretty entertaining baseball game on Sunday afternoon.

In fact, it even went extra innings, with San Francisco scoring two runs in the bottom of the eleventh for the walkoff win.

However, despite this excitement, the real fun was had by San Diego before the game.

Well, it seems the regular team bus decided not to show up, leaving the Padres without a lift to AT&T Park.

While this may not strike you as a recipe for a good time, one resourceful team official begged to differ.

Here is a more thorough explanation:

Details on the Padres' travel this morning: Team bus never showed, so TJ Lasita, the team's director of player and staff services, flagged down an empty San Francisco tour bus. He settled on a rate with the driver, and shortly thereafter the Padres were on their way to AT&T Park.

And not just any tour bus, mind you.

This was a double-decker tour bus.

Since the San Francisco Pride Parade was in progress, this lucky MLB ballclub received a police escort all the way to the stadium.

The Padres social media department was beside themselves with joy, eagerly sharing this news with the masses.

The Padres may have lost a regular season baseball game on this day, but they won so much more in the process.

If only there had been time to tour Alcatraz.