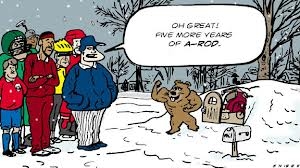 I thoroughly enjoyed watching the Mets give the Yanks a good old-fashioned behind-the-woodshed-beatin' last week.

I enjoyed it even more watching my Sawx beat 'em two out of three in the following series.

It was while watching those seven games that I realized, even though they are in the hunt right now, they are going absolutely nowhere near the short series this year. The Yanks may have a chance in the short series with CC (Constantly Chewing) Sabathia and Hit-roki Kuroda as a solid No 1 and No 2 tandem ... except, as their roster is presently constituted, they simply don't have the horses or the position players to get there.

Before the season started, Brian Cashman -- who is the baseball visionary equivalent of Mr. Magoo -- somehow bandaged this fugly roster with re-treads, over-the-hill has-beens and never-will-bes that, to this point, have somehow played miraculously over their heads. But lately, as expected, they have come crashing back down to earth. The same way Motown exposed the Yankee team in last year's playoffs as the one-dimensional squad it was, the progression of this season is exposing this Yankee team for the role players and fifth outfielders they continue to be. If you think about it, the Yanks really did nothing to improve upon that team going into this year, and it shows.

Take Vernon Wells, for example. His torrid start had Yankee fans thinking of him as the Vernon Wells who gave MLB pitching night-terrors for years with the Blue Jays. Now they just think he's more like Vermin Wells, and the Yankee shot-callers are desperately trying to figure out a way to eradicate him. Lately, he's been lookin' like he's on a morphine drip at the dish, and even worse than that, in the outfield he appears to have all the range of a broken stove.

A stove that's been dropped into leftfield right before game-time by a C-130 from 2,500 feet.

Then there is Joba Chamberlain and Kevin Youkilis. Their biggest contribution so far this season has been their willingness to be buried side-by-side up to their eyeballs in dirt so that fans as far away as Jerome Avenue can watch the pre-game highlights on their massive Jumbo-Tron sized foreheads. Joba recently came of the DL again after another losing bout with Down's Syndrome. You can see in his face as he's pitching that he just doesn't seem to be all-the-way back from it yet. After every pitch, he continuously looks up to the scoreboard in a futile effort to remind himself of his name and what he's doing standing out there in front of all those people. It's also very strange, but I couldn't help but notice that he looks like a cross between a young Jonathan Winters and that clown Chumlee from the TV show Pawn Stars.

Well, help is on the way, because Mark Teixiera recently came off the DL after missing like ... 400 games over the last three years due to Whooping Cough or Pertussis or whatever the hell makes his cheeks look like that when he swings and tries to run to first base.

Since his arrival in the Bronx, the Yankee fans were expecting him to be the second coming of the Iron Horse, but instead he's been more like the Iron Lung due to the fact that he runs like an asthmatic with a Steinway piano strapped to his back. Couple that with a sub-.250 average over the last five years, and that's another $188million of Big Stein's dough that was very well-spent.

Last, and certainly the very least, there is Alex Rodriguez. Is there a bigger tool in organized, professional sports today? He's back in the news again for taking 'anti-aging' drugs. Uh huh ... I'm hearing that sources close to Alex say the real problem is he's fighting an addiction to Viagra. It seems as though Alex was frustrated by the fact that the Viagra only succeeded in making him taller. Ah yes, finally something out of Alex's camp that makes sense!

How is he supposed to recover from hip surgery when he's 11' 9"? No wonder they think he's still taking human growth hormones.

Tune in next time, when I discuss the panicked, mass exodus that occurred at Yankee Stadium on Memorial Day weekend when the fans saw Travis Hafner's face for the first time up close on the Youkilis-Chamberlain Jumbo-Tron. 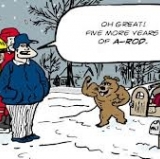 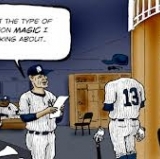