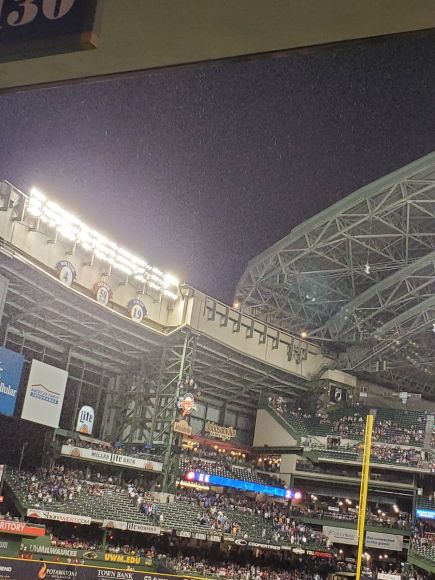 For a sport like baseball that's played predominantly outdoors, inclement weather is just a necessary evil to be dealt with.

Of course, for ballparks with modern amenities such as a retractable roof, these annoying headaches can be avoided.

However, at least one human person needs to make a decision and actually order the roof to be closed.

This is where we occasionally experience a disconnect.

The crack staff at Miller Park was dealing with some very public cognitive issues just the other night.

The St Louis Cardinals were leading the hometown Brew Crew, 3-1, in the top of the seventh when it started to rain.

Under normal circumstances, this wouldn't be a problem, but on this fateful evening, the roof remained open for reasons that are probably above our paygrade.

There was a rain delay at Miller Park.

Yes. They have a roof. pic.twitter.com/SKLx4E36QL

By all means, push the button.

No really, its okay.

Apparently, it takes 10 minutes to open and close the roof completely, but the trick is to anticipate shitty weather, perhaps by using meteorological technology such as that fancy Doppler radar.

Now, the Brewers broadcast team had themselves a hearty chuckle about the whole thing.

Let's contrast their reaction with the Cards' people:

We have a rain delay... At Miller Park... Which has a retractable roof... WHAT? 🤔#TimeToFly pic.twitter.com/rwyxwUyYpI

It really wasn't necessary for this humorless duo to point out the irony of the situation, but they did so anyway.

The game eventually resumed after only a nine-minute delay, with the Cardinals winning, 6-3.

Meanwhile, the operations crew will be completing mandatory training modules while the team is on the road.