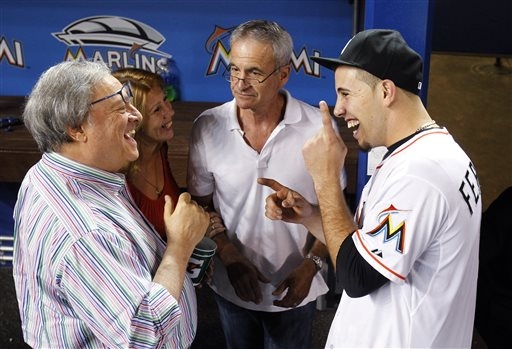 Nobody has ever accused the Miami Marlins of being a stable organization.

The team was predicted to have a coming out party in 2015, but the only thing that came out is owner Jeff Loria is still a jerk.

Things were so bad, the team decided to fire their manager mid-season and replace him with their GM, a dude who hadn’t skippered on a level higher than high school.

To be fair, the Flounders Fish were hampered by a plethora of injuries to key players throughout the season. However, no amount of doctors and trainers can heal the Marlins' biggest malady; organizational instability.

Recent news goes to show that things aren’t looking to get better anytime soon in Miami.

Reports have begun to surface that the team is looking to deal its star young pitcher José Fernández.

Why would a team look to deal one their best pitchers, who has a chance to be the best pitcher in the game?

Unsurprisingly, the two sides absolutely loathe one another. The team is unhappy with Fernández’s attitude, as reports have come out claiming dude's more of a hassle than he appears to be. Fernández is apparently none too happy with the Marlins either, as he reportedly can’t wait to get out of Miami.

This would help make sense as to why Fernández turned down a long term offer, even after coming off a season lost to Tommy John surgery.

Again, why would an org look to deal a young star in the making?

When the Marlins are involved, it’s over petty problems.

Loria cannot stand Ozuna, which explains why he was sentenced to the minors for a majority of the year.

The Marlins have the potential to be a good team again, but that won’t happen as long as the team is sidetracked by sideshows hampering its star talent.

Sadly, Loria can't be traded. But dude can shed a team like a snake sheds its skin.

But fear not, Marlins fans.

Until that ultimately happens, you’ll get to see Ichiro pitch again.