The Mets? Kings of Gotham? 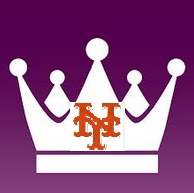 The New York Mets entered the Subway Series with a record of 19-29, while the New York Yankees were 30-20 and in first place despite a rash of injuries all season.

Well, the Mets shocked the city with a sweep of their rivals, defeating them four straight times.

Pitching was the key for the Mets, who got great starting performances from Jonathon Niese, Matt Harvey, Jeremy Hefner, and Dillon Gee. The first two games were pitchers' duels at Citi Field, and the Mets came back late to win both. Niese threw seven innings in the first game, giving up one run, but the Mets trailed until the seventh inning when David Wright homered. Daniel Murphy drove in the winning run in the eighth inning with a single off of David Robertson.

Game Two was a pitching classic between Harvey and Hiroki Kuroda. Harvey pitched eight innings of six-hit ball, striking out ten, but trailed 1-0 going into the ninth inning when the Mets rallied remarkably against Mariano Rivera. A double by Murphy, single by Wright, and a single by Lucas Duda gave the Mets a thrilling 2-1 victory. It was the first time ever that Rivera did not record an out in a save situation.

The Mets made Game Three easy for Hefner with five runs in the first inning as the series shifted to Yankee Stadium. The Mets banged out ten hits, including a home run by Marlon Byrd and eased to a 9-4 victory.

Gee finished off the stunning sweep on Thursday, giving up four hits in 7⅓ innings in a 3-1 win. Byrd hit another home run while John Buck drove in an insurance run. That win made it five straight wins for the Mets and five straight losses for the Yankees.

The Mets were kings of New York CIty for one week, but already things started getting back to normal on Friday. The Yankees defeated the hated Red Sox while the Mets were drubbed by the lowly Marlins.