The Many Dead Horses of Johnny Cueto 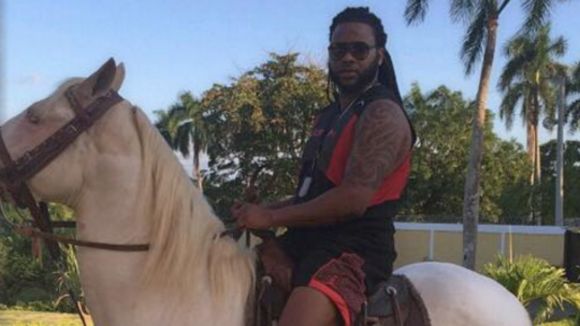 However, there's more to this dude than just baseball.

One of his numerous outside interests would be the keeping of horses, which must bring him immeasurable joy.

Sadly though, all is not well in the world of Johnny Cueto on this day.

Yes, Cueto's cherished Popeye has shuffled off this mortal coil much too soon.

We know this because Johnny shared a photo of his dead horse on social media, perhaps thinking this would expedite the healing process.

Oh my god. Johnny Cueto posted a photo of his dead horse? pic.twitter.com/NDXTa7t2kn

That was so not helpful.

While this may be cathartic for Cueto, the rest of the civilized world could've managed just fine without that visual.

Johnny Cueto will start playing catch next week. In other news, he said his horse, the beloved Popeye, died because he ate poisonous grasshoppers.

A more productive way to cope with this loss should be focusing our collective energy on eradicating the poisonous grasshoppers that killed our beloved Popeye.

That's right, whatever it takes.

Incredibly, this exact same scenario played out back in 2016, except this version of Popeye was white.

Was a tough day for Cueto. Found out his beloved pony, Popeye, died in DR. Then Cueto had upset stomach as he warmed up.

We'll spare you that photo collage.

Anyway, we can take some solace in the fact that Cueto hasn't been photographed beating a dead horse.

Sorry, had to do it.