The Madness of Jeffrey Loria 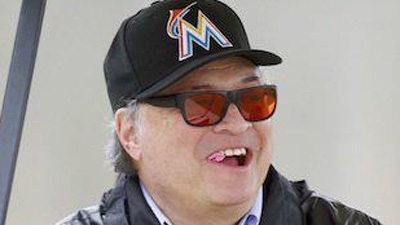 The fish are floundering down in Miami.

The Marlins came into this year with big expectations, but to date, they've been nothing but a huge flop.

They're currently 16-22 and in sole possession of fourth place in the not-so-imposing National League East. Yesterday's lowlight was a 6-0 loss to the Braves, where they came within one out of being no-hit.

Jeffrey Loria, Marlins team owner and all-around villain, could simply take no more -- as if -- and decided to fire both the team manager Mike Redmond and bench coach Rob Leary.

Redmond, who was in his third year with the team, was in danger of getting canned as early as the first month of the season. Dude was given a meager 38 games to prove to Loria that the team’s expensive off-season moves were worth the purse that provided them.

After a fun night of wild speculation over who the new Marlins manager would be -- including such experienced names as Dusty Baker, Ron Washington, and even Ivan 'Pudge' Rodriguez -- the team announced this morning that General Manager Dan Jennings would take the reins.

Yeah, right. Jennings' last managerial job was back in the 1980s, where he led the Davidson High School varsity.

Why does this make sense to a career jerk like Loria?

Well, besides having to pay Redmond until 2017, the Fish are still paying Ozzie Guillen, whom the team fired one year into his Marlins managerial stint.

In case it escaped notice, Loria is regarded as one of the least popular owners in the entire league, which is hard to accomplish in a universe where Fred and Jeff Wilpon exist.

Whether he's firing the reigning NL Manager of the Year, building a stadium via lying to the public, or trading away all of the team’s stars, Loria has confirmed time and time again that he's the Snidely Whiplash of baseball.

And it's business as usual.

To be fair -- and yes, that can be tough -- the last time Loria dumped a skipper when the team was 16-22, the Marlins went on to win the World Series.

So maybe Loria isn't that crazy after all. Still evil, though. Or, Loria might have gotten lucky that Jack McKeon was able to save him. But McKeon isn’t coming to the rescue this time around.

Who knows? Maybe things will work out after all, Marlins fans. And if it doesn’t, you can always watch Giancarlo Stanton hit balls into the atmosphere.