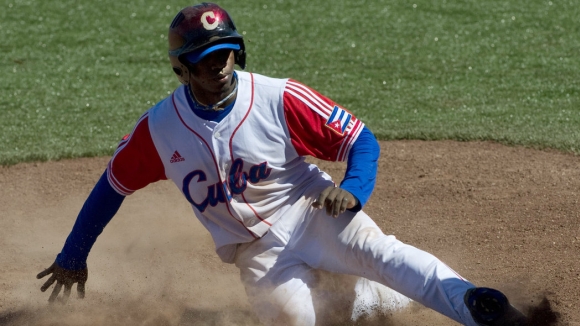 It's the baseball factory with a back door.

But when its best players pull down $20 a month in salary, it's obvious that clandestine exit is well-oiled.

The latest to pass through it is 26-year-old Rusney Castillo, a versatile 5-9 center fielder with speed to burn and gap power.

He tried to do it once before, got discovered, and was thus dropped for Cuba's formidable national team in favor of the next big thing, someone who may benefit from relaxed restrictions by the time it's his turn to cast his eyes across the Gulf of Mexico to more fertile ground.

Like compatriots Yasiel Puig, Yoenis Cespedes, and a veritable host of others, Castillo had to depart Cuba the old-fashioned way, with the help of smugglers. This occurred in December, and he's now in the Dominican Republic with MLB teams beating a path to his door. One of them is the Dodgers, which should counterbalance the news that they've signed Chone Figgins.

Castillo can definitely help someone by the time he's jumped through all the hoops to be eligible to sign:

It remains to be seen if Castillo will be the second coming of the Toy Cannon. However, there will be no paucity of suitors willing to pay lotsa dosh to find out.