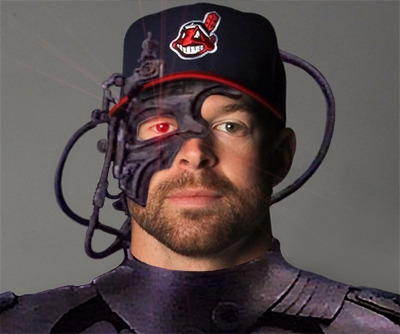 After a eyebrow raising 0-5 start to the 2015 campaign, questions were being asked. Were Corey Kluber's mechanics obsolete already? Dude didn't look like the well-oiled machine of 2014.

Then, three starts ago, the switch flicked on, at the expense of St Louis:

Kluber followed that performance by whiffing 12 more and yielding only one run in nine innings against the Chicago White Sox -- but Cleveland still lost -- and then kept it rolling by punching out seven Cincinnati Reds in eight innings tonight in a 2-1 Tribe triumph. 37 K's in three starts; Bob Feller hizzownself would've been proud of that.

Cleveland has reeled off five wins in a row now and no longer own the worst record in the American League. Still, they've continued to post some of the worst defensive numbers in the history of baseball, which is one reason why they're still nine games back of Kansas City in the AL Central.

Some suggested Kluber's horrific start was due to either poor luck or a transition to a new catcher. However, after three straight starts of sheer domination, it's clear he's plugged into what worked for him in 2014 and he's the Klubot again.

At least MLB's not testing for that. Yet.

And right now, the Klubot's just in a different world.