Published on 5-Oct-2014 by Xavier McSpaniel 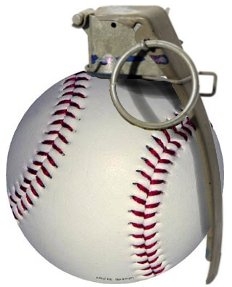 The Washington Nationals lost the battle to the San Francisco Giants in Game 1 of the NLDS.

In Game 2, they brought in some extra ammunition, hoping to stay alive in the war.

Brian Keaton -- an Army vet wounded in Iraq -- lobbed the ceremonial first pitch ... and we mean lobbed literally. Keaton crawled toward the mound as if escaping no-man's land and then hoiked the baseball into the foxhole of home plate.

The display got the crowd going; to the dismay of the Nats, it also saw the Giants' Brandon Belt go full metal jacket.

After forty-seven hours of blood, guts and whiffs, Belt launched a bleacher bomb in Inning 18 that ultimately separated the two National League combatants and exploded any thought Washington fans had of going to San Fran on even terms.