The Growing Legend of Bartolo Colón 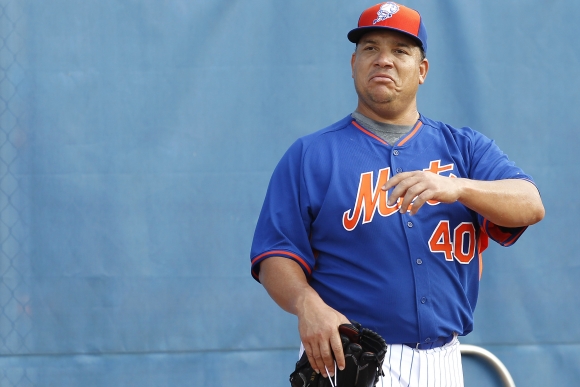 And his name is Bartolo Colón.

Dude's not a man one would describe as athletic. His physique is more akin to your average sports fan than your average player, but don’t let his humble appearance fool you.

The man is a walking highlight reel.

And no, not in a JaVale McGee look at me fail sort of way.

Even at the ripe old age of 42 and a listed weight of 265lbs -- in his dreams -- Colón’s starts are nothing less than must-see TV. And dude’s recent starts have been a testament to the man’s growing legend.

In a 7-2 Mets win against the Braves, Colón broke a major league record for stringing together the most consecutive scoreless innings by a pitcher 42 years old or older. Those 31 blank frames trumped the previous two record holders' sequences of 27 innings.

Who were these two dudes? Only Warren Spahn and Cy Young.

Sure Bart’s record is oddly specific, but the guy is 42 years old. But in a sport that is supposedly a young man’s game, Colon is eating the competition up.

Bart’s record breaking scoreless streak was stretched across 5 appearances, which included the Mets first complete game of the season and a one inning relief appearance. But Colon’s streak of greatness is not limited to the pitching the mound. The dude is also a stellar fielder.

And for those of out there who like offense, the portly Dominican knows how to wheel that lumber:

Is there anything he can’t do? Besides touch his toes?

Best of all, Colón’s recent success -- along with some other Matt Harvey-related news -- may just be enough to earn the wily veteran a spot in New York's playoff rotation. Can you say World Series MVP?

At some point in the near future, Colón will hang up his cleats forever. But until that tragic day comes, take time each day to appreciate this living legend.