The Freeze Has Become a Global Phenomenon 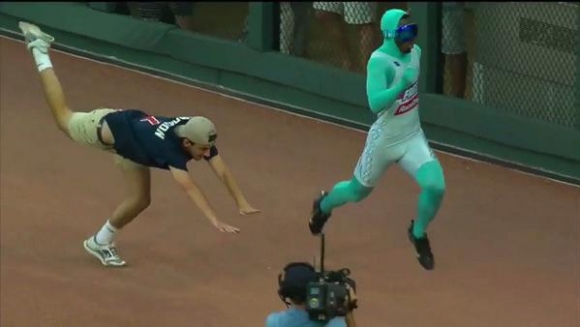 MLB has come a long way in regard to in-game promotions and theatrics.

While minor league baseball still has the edge in creativity, entertainment at MLB ballparks has significantly improved.

For example, we have a dude called The Freeze who wears a body suit and races random fans at SunTrust Park in Atlanta.

Perhaps an explanation is in order.

On second thought, why don't we just show you:

As you can see, the concept is relatively simple.

In between innings, The Freeze races a lucky fan around the warning track, giving him or her a sizable head start.

In this particular case, the fan in question was a massive tool and began celebrating a bit prematurely.

Obviously, The Freeze was having none of that.

Sadly, The Freeze isn't just some mental patient who somehow convinced himself that he was this character.

This promotion has become quite popular in Atlanta, despite the fact that Talton actually lost a race recently.

Perhaps the Braves could develop the character more by allowing him to use clever puns before and after the race.

Then again, perhaps not.