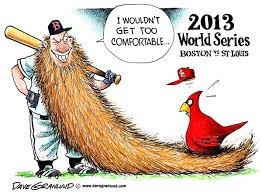 It's that time of year again, when autumn not only ushers in colder air, but a mental shift in American sports.

To many, America's pastime has been dethroned by football, but this week, one can argue that MLB once again regains the throne in the sports world. And for the first time in what seems like decades, the two best teams, record-wise, in their respective leagues square off in a battle for baseball's ultimate prize.

Not only is this a matchup between two household names, but both the Boston Red Sox and St Louis Cardinals showcase storied histories and exceptional fan bases. And one of them will win their third title of the new millenium.

One of the biggest reasons will be home field advantage, courtesy of that American League victory in the All-Star game. The Sox have developed an experienced and strong rotation, which includes Jon Lester and the man whom I believe is the current team's ace, Clay Bucholz.

The back end of Boston's bullpen isn't as heralded as the Cardinals' late-inning flamethrowers, but I believe it's enough of a strongsuit, especially with their closer, Koji Uehara, whose devastating splitter more than compensates for his pedestrian velocity.

Lastly, much has been made of the Cardinals' amazing crop of rookies, but the Red Sox have such an arsenal of veteran players -- Dustin Pedroia, David Ortiz, and Jacoby Ellsbury, to name a few -- whose experience in big games can make them more reliable in big games.

After ending 2012 in an embarrassing way, Boston has rebounded strongly and has plenty of confidence to guide them to their third World Series title in the last nine years.