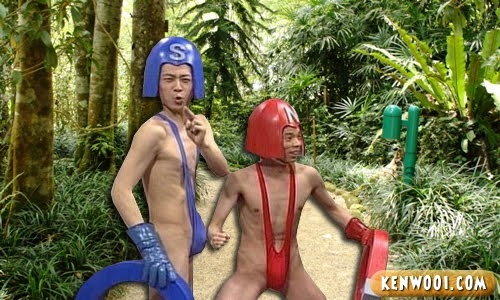 OK, so maybe it isn't the most popular sports network in the world, but the Japanese sure do love it!

Although that doesn't diminish the fact that these people are absolute lunatics who have a depraved indifference in regards to what they consider sporting events.

Even the average American sports fan has seen at least one clip of these Japanese game shows where you really can't believe what you just saw.

For example, my initial reticence to watch one show in particular slowly dissipated to the point where I felt compelled to see it.

There are these three naked dudes in a packed 'gymnasium' of sorts. They proceed to shotgun like two quarts of what amounted to be a laxative, loosely translated in the subtitles to mean something called Wrath of God. So now they have my undivided attention.

These dudes then begin running in place and doing some fruity aerobics until the inevitable occurs. The good part was when the host -- who was clearly shimmed up on some kind of amphetemine -- announced that the last dude whose intestines weren't outside of his body wins a lifetime supply of that God's Wrath laxative product.

I remember thinking, Where do I sign up for this? It works on so many levels! What a country!

Speaking of Japanese sporting events, their baseball playoffs were in full force last month, too. And damned if those tenacious Fuluoka SoftBank Hawks didn't raise the fluffy teddy bear when all was said and done:

Trust me, they ultimately stopped. But keeping the cameras on it would've been awkward.

Anyway, all that excitement reminded me of a series some years ago that was tied at three games apiece, and ex-MLB 'relief' man Vincente Padilla was on the hill, trying to protect a two-run lead in the ninth.

Padilla had pitched for a number of MLB teams during his career, and besides being voted World's Most Repulsive Looking Human, his real claim to fame is that he was the dude in that picture of Darwin's Theory of Evolution when the thing slithers out of the swamp and you eventually see it evolve until it becomes Vincente Padilla walking upright on two legs.

There were certain scientists attempting to prove it was him by doing the Ancestry.com thing, but they said his relatives had to be carbon-dated.

Anyhoo ... Padilla ended up serving another blast-heard-around-the-world that blew the roof off the Tokyo Dome. Making Japan, still,  to be the only country to ever sustain three nuclear bombs. The unfortunate 60,000 fans in attendance had their shadows seared into their seats forever. As well, the forms of the fans who fled before he took the mound can be seen engrained into the asphalt parking lot.

It was reported that Padilla was given his release in absentia by the team officials.

OK, thrill-seekers, stay tuned for next time when I talk about going ape with Furious George and how we avoided jail time.