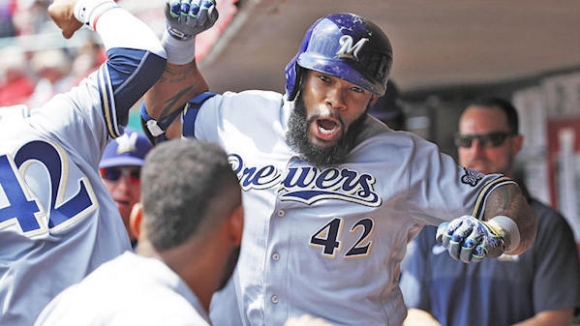 In a perfect world, an obscure athlete could perform at a high level without arousing suspicion.

Clearly, we don't live in such a world.

Milwaukee Brewers mystery slugger Eric Thames has been swatting baseballs all over the yard so far this season, currently leading all of MLB with 11 dingers.

The former Korean League star recently did his thing at Wrigley Field against the Chicago Cubs, much to the chagrin of the lovely and talented John Lackey:

That was Thames going oppo off Lackey for his fifth homer in as many games.

The jewelry enthusiast suggested that Thames bomb was something of a head scratcher, even punctuating his comments with a smile and a wink.

Meanwhile, in yet another episode of MLB random drug testing, Thames was approached after the game by an MLB representative and asked to piss in a cup.

Regardless of suspicion, Thames continues to swat anyway.

Wait a second, that was opposite field, as well.