The Dodgers Make History with One Impossibly Clutch Inning 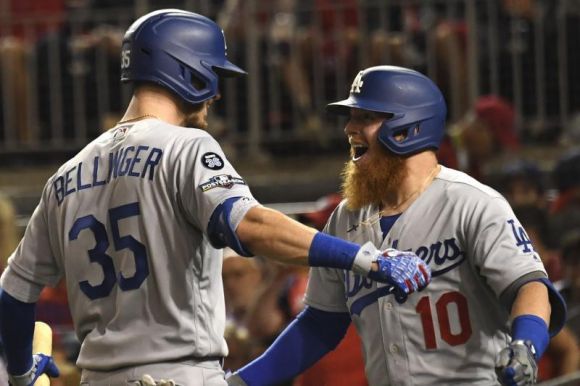 Post-season baseball is officially upon us, and it's not screwing around.

The NLDS between the Dodgers and Nationals is currently tied up at two games apiece, but LA did something in Game 3 that's literally never been done before.

Baseball is certainly a stat-driven sport, but the Bums' batshit 6th inning featured one recurring number.

And that digit would be 2.

Apparently the Dodgers, because these dudes scored seven runs all with two outs.

But check this out:

Every one of those two-out runs were scored on hits with two strikes.

Behold the very essence of clutch:

Russell the Muscle has entered the chat. #NLDS pic.twitter.com/nAxOaZ4gph

That's Russell Martin doubling in two runs off Patrick Corbin, who bore the brunt of this catastrophic inning for the Nationals.

After another two-run double, Justin Turner did the following:

Yep, that missile was also launched with two strikes.

As we mentioned earlier, all of this shit was historical:

All of the @Dodgers 7 runs scored in the 6th inning came with 2 strike counts and 2 outs in the inning.

No team has ever done that in a #postseason inning. pic.twitter.com/7mbYykahMW