Published on 8-May-2015 by Trent Jackson 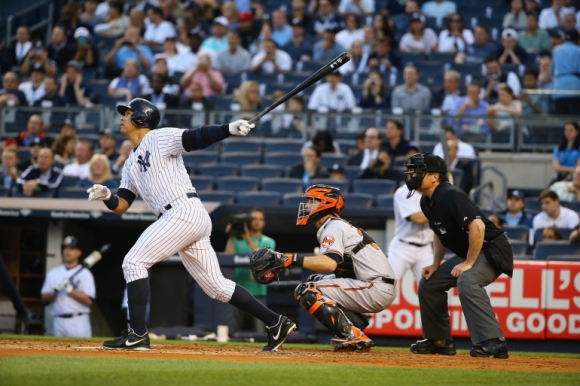 As of yesterday, Alex Rodriguez has now launched 661 bombs.

To say he's all alone in fourth is ironic. Because with his history and people skills, he's been all alone for a while.

A-Rod tied the legendary Willie Mays with a line drive over Boston's Green Monster back on May Day, and after a week's wait, pushed the Say Hey Kid to fifth.  (Incidentally, that was a nickname the media gave him. Players called him Buck.)

Funny story: that solo shot could have ended up being No 662 if it weren't for A-Rod being robbed of a 3-run shot in the first by Delmon Young:

After passing Mays, A-Rod only had words of respect for him, saying "no one will ever pass him".

Dude, you kinda just did, but we get what you mean.

While his team surely enjoyed the offensive boost in a game that would end up being determined by one run, the fans were particularly ecstatic. When Rodriguez tied Mays, he was in Fenway and was surrounded by boo-birds. This time, he was in New York and received plenty of love from the fans. They even chanted for a curtain call.

Fans. First they love him, then they hate him ...

And now they love him again. Guess it's a good thing to live in the moment.

That's gotta be one powerful drug.

Anyway, with Mays in A-Rod's rear-view mirror, he's now gotta set his sights on the Bambino at No 3, sitting at 714. Probably won't happen any time soon, but he'll surely try. All by himself.