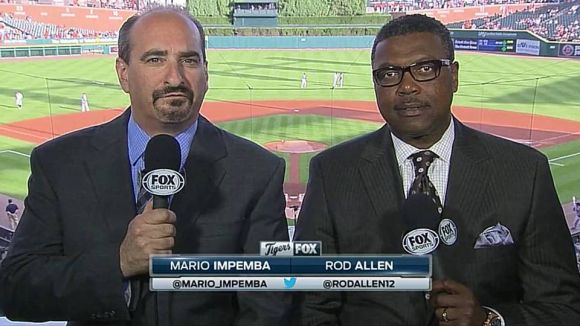 However, it seems the issues that sometimes occur in a standard workplace apply there, as well.

Apparently, the Fox Sports Detroit television broadcast team of Rod Allen and Mario Impemba got into a bit of a scrape after a recent Tigers game.

Reportedly, the proverbial straw that crippled the camel involved a disagreement over a chair in the booth.

This may or may not be true, as details on what precisely went down are scarce at the moment.

Whatever the case, it was enough to allegedly compel Allen to follow Impemba out of the booth and attempt to choke him from behind.

There was little pleasure in evidence here, as it appears the two combatants don't really have much chemistry, on or off the air.

In fact, there were several instances during the game where the pair fell silent for long stretches, leaving viewers with only moving pictures and no verbal guidence of any kind.

Perhaps this could've been handled through some sort of human resources mediation, but these dudes decided to resolve their conflict in a more direct fashion.

Sadly, we won't be hearing from these two misfits for the remainder of the season, as the powers that be have rendered a verdict.

After speaking with all involved parties, FOX Sports Detroit has decided not to schedule Rod Allen and Mario Impemba for any future Tigers telecasts this season. Since this is an internal matter, we will have no further comment.

Oh well, we can always listen to the crotchety Joe Simpson.