The Dark Knight Stumbles: How to Lower Your Expectations 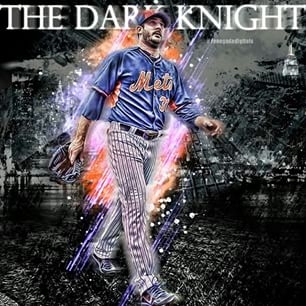 Gotham is not getting the hero it deserves or needs right now.

Sure, they've got Thor on their side, throwing baseballs like they were descended from Mjölnir itself and cutting a tremendously intimidating figure, but their suave vigilante, the resident badass playboy of the pitching staff, is floundering.

Nobody should be surprised that Matt Harvey, baseball’s darling of 2013 who missed all of last year rehabbing from Tommy John surgery, isn’t as dominant as he was when we last saw him.

Yes, he’s walking more guys than usual, but that’s not a serious problem. Command is often the last thing to return to form post-TJS, so while seeing Harvey give up free passes to lowly knaves such as José Lobaton and fellow TJS survivors like Patrick Corbin is disheartening, it is not cause for alarm. Yet.

Plus, I will remind you that his ERA sits at a respectable 3.19, even with last night’s awful outing. His 3.54 FIP backs that up to a large extent, showing that Harvey’s still fairly effective at controlling the things he can. There is no reason for concern.

There's no reason for concern. Keep calm and switch it over to the Dodgers, Astros, or something. Anything. I don't want to watch the f*cking Mets any longer than necessary!

What could be cause for concern, though, is Harvey's dip in strikeouts and rise in homers. Dude's in danger of getting whiplash from so frequently turning to watch baseballs speedily exit the yard.

He’s already allowed 14 bombs on the year. For a frame of reference, the Mets' ace had only allowed 12 long balls in his career prior to Opening Day 2015. Moreover, he’s currently posting a 8.52 K/9, more than a strikeout less than he averaged during that impressive 2013 campaign.

For a Mets team that still has relatively strong playoff hopes, this couldn’t be happening at a worse time. They’re already down one superhero in their injured third baseman, David 'Captain America' Wright, and the aforementioned Nordic god/starting pitcher, Noah Syndergaard, has all of 73⅔ innings under his belt as of this writing.

It'd be more prudent to wait on Harvey than make a significant pitching addition at the deadline. There’s little to no indication that the Amazin's are discussing any moves in that department -- others, though, are still simmering -- and they don’t make sense as players for Johnny Cueto’s expiring contract or Cole Hamels’ expensive deal.

Rumor has it that the team could be in play for Scott Kazmir, a rebuilding project in his own right who's currently languishing in Ch-Oakland -- boom, Athletics fans! -- who has pitched surprisingly well over the last two seasons.

Having someone like Kazmir on hand would take some of the pressure off of Harvey, which could do wonders for his mental game. If he can get back to locating his fastball properly -- and maybe throw the slider a bit more often -- everything should normalize quickly.

Regardless, the Dark Knight will rise again. The numbers aren’t great, but he’s due for a little positive regression. If the team falters in spite of him, I doubt anyone will be shocked.

Even the Joker couldn’t turn the Mets into a bigger laugh than they already are.