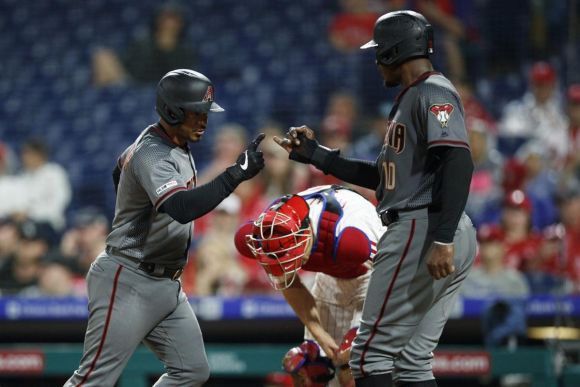 If there's any truth at all to the maxim about chicks digging the long ball, then the spread after a recent game between Arizona and Philadelphia must've been spectacular.

In a 13-8 Diamondbacks victory, the winners blasted a team-record eight dingers in front of a dumbfounded group of Phillies fans.

The Phils hit five bombs themselves, bringing the grand total to a supernatural 13 homers in a nine-inning baseball game, which is absolutely an MLB record.

The 2019 MLB season has been defined by the spectacle of lubed-up baseballs being rocketed into the dark recesses of deep space.

When you consider this new normal of launch angles and mutant-like opposite field power, it should come as no surprise that the single-game homer mark would fall.

Let's have a look at a few of the aforementioned taters:

Sadly, that was just the top of the first inning.

That dude who hit the first pitch out to right appears to weigh around a buck-and-a-quarter, but to each their own.

What the hell, let's just watch all 13 together at once:

We simply don't have the time, space, or desire to list every single player who homered in this game, but a few names do bear mentioning.

Also, Phillies outfielder Scott Kingery hit not one, but two opposite field homers, something he does all the time.

Obviously, home runs are fun to watch, but when combined with all the strikeouts and walks, this three-outcome baseball can be a wee bit tedious.

For good or ill, these genetically engineered baseballs are going to continue to fly long and far, so it's useless to resist.

Besides, chicks really do dig the long ball.

That commercial just gets better with age.