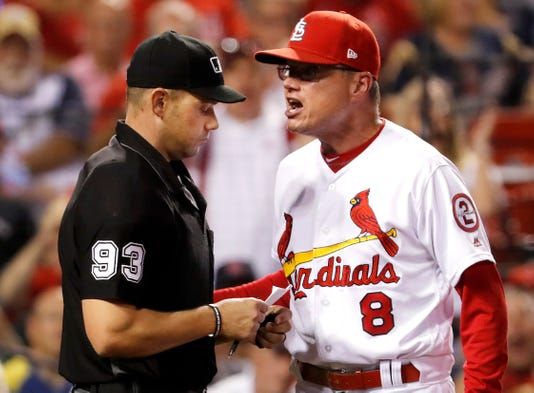 Once August rolls around, things tend to get very serious in MLB.

Every single game becomes critical, particularly if you happen to find yourself in a death match for the division title.

The St Louis Cardinals and Chicago Cubs are engaged in just such a duel, which makes what happened a few nights ago all the more peculiar.

The Milwaukee Brewers and Cards were throwing down at Busch Stadium when the elements interrupted a perfectly good baseball game:

Indeed, play was stopped in the middle of the eighth inning with St Louis trailing by two runs.

In their infinite wisdom, the umpires gave it a little over an hour before packing it in for the evening.

Of course, this decision gave the Brews a 5-3 victory, causing the Cardinals to lose their tenuous grip on first place.

While that's probably a bit strong, this development did seem somewhat arbitrary.

And when you take the circumstances of the wacky NL Central race and the fact that St Louis was at home into consideration, a few eyebrows were raised.

Not surprisingly, Cards' skipper Mike Shildt had some thoughts on the subject afterwards:

Shildt frustrated after ballgame is called early due to rain: "We were set up to compete and win the game for sure. So I would've liked to have the opportunity."#TimeToFly pic.twitter.com/Lpof4CwNS0

He's certainly not the most dynamic public speaker, but dude has a point.

However, it's just not possible to have a uniform rule on when to call a game, as each situation and umpiring crew is different.

Many folks even wondered aloud what actually constitutes a regulation MLB game.

Anyway, we'll all have a hearty laugh about this if the Cardinals lose the division by one game.