The Cardinals Did That 'One Strike Away' Thing Again

Published on 7-Sep-2016 by Alan Adamsson 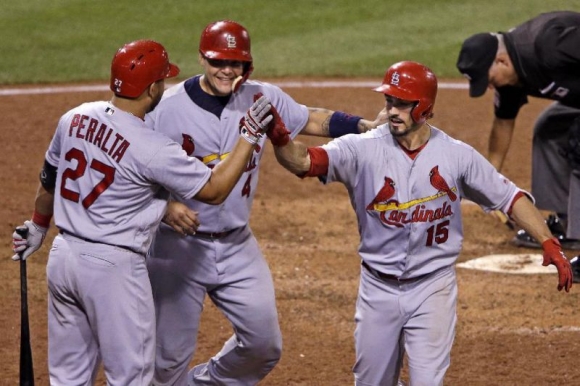 Ever since spring training, various voices on the St Louis Cardinals have made no secret about wanting a return match in October against the long-time rival Chicago Cubs.

There's no doubt the Fuzzies will be there, and with a few former Redbirds in their camp.

The issue is whether or not St Louis finds a way to get their wish.

As the Wild Card contender who, incredibly, has a sub-.500 record at home, that could take some doing.

If a dramatic moment was needed to spark their charge to the playoffs, it may have happend to St Louis last night in Pittsburgh.

There they were, fresh from blowing a first-inning 4-0 lead on Yadier Molina's grand slam, with pinch-hitter Matt Carpenter facing an 0-2 offering from Pirate closer Tony Watson.

The Cardinals have been here before.

In Game 6 of the 2011 World Series, David Freese was down to his last strike in both the ninth and eleventh innings:

In recent times, the mandate given to Cardinals scouts is to listen to bat contact before considering anything else in a hitter. If it sounds more solid than anyone else's in a given game, they've found a prospect.

It's the anti-stat, but it's also transformed St Louis into one of the game's most powerful offenses:

Barring a miracle, the 9-6 shock ending in this one virtually eliminated the Pirates from Wild Card contention, putting an exclamation point on their current losing streak.

And Miami's activation of resident he-man Giancarlo Stanton is too little, too late.

With San Francisco hanging on for dear life -- the Giants own baseball's worst record since the All-Star break -- St Louis probably needs only to play .500 ball for the rest of the month to be one of the three remaining clubs with a realistic shot at a Wild Card slot.

The Cardinals started their charge to the 2011 World Series as a Wild Card team. It set the stage for a dream finish.

And the Cubs are as ready as they've been in 108 years.